by Ross Calderwood of Reraig

As far as we know, nobody has ever attempted to make bagpipes from Rhododendron x superponticum. It has now been done - and why not? - by one of the top makers of small and border bagpipes, Ross Calderwood (Lochalsh Pipes). The result is a mouth-blown Scottish Smallpipe with interchangeable chanters in D and A (C & G too) tuned to the standard Scottish mixolydian mode. The chanter is supported by four drones tuning to various pitch combinations to suit each chanter. The little plugs temporarily silence un-needed drones. The bag is modern, made of GORE-TEX (cover, green wool cloth), but the timber is real and appropriate for this campaign: locally sourced rhododendron. Although trunks are quite slender and the wood cracks radially as it dries, billets sufficient to make smallpipes can be obtained and once seasoned, no further splitting occurs (so far). When turned and polished, the wood is almost white with with a faint grain and occasional interesting markings. After a year or so of exposure to light and constant handlingbut it gradually takes on a warmer hue. The decorative black mounts, streaked white, are of African buffalo horn. The tone is scrumptious, not unlike the music of the familiar Northumbrian Bagpipe.

The Rhoddiepipes o' Lochalsh were first created as part of a programme to raise public awareness of the evils of rhododendron which is invading large expanses of Britain, threatening native biodiversity, especially in woodland (you know the sort of place, where shafts of sunlight patchily illuminate carpets of bluebells, stitchwort, soft brome and pignut beneath mighty oaks). 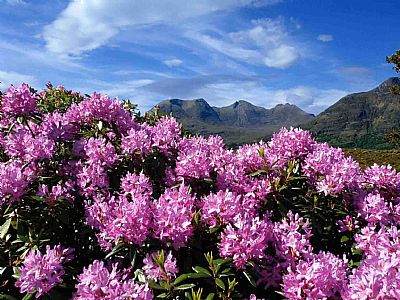 Few people are aware of the severity of this threat to the countryside and many quite understandably consider R. x superponticum to be a very beautiful plant. They wrongly think it belongs in our landscape and don't consider it could be anything other than benign. [This picture shows how total a woodland invasion by rhododendron can be.] Would you believe that organised tours trundle around rhododendron hotspots by the coachload during flowering time in May and June? R. x superponticum was, in fact, introduced for horticultural purposes in the eighteenth century and is one of those terrible few garden plants that have escaped and got completely out of hand [see Non-Native Species Secretariat].

The beautiful pink-blossomed beast occupies many, many gardens as well as the countryside into which it continues to escape and spread (some garden centres still have it for sale!). So our task has to be one of shifting public attitudes. The question is how to make people hate such a lovely plant, changing their delight into loathing, or we'll never be rid of it. That has to be ultimate goal: eradication.

James Merryweather of Skye & Lochalsh Environment Forum, who commissioned and plays the instrument [international debut at the Highland Biodiversity Forum at SNH headquarters, Inverness, 13-03-2010], embarked upon a mission to publicise the Lever & Mulch method of eradicating Rhododendron x superponticum (rhoddie) using a variety of media, including his lecture: "Problem? What Problem?" With any such enterprise, in which enhanced public understanding is the main goal, impact is vital. That can be eccentric if it's appropriate and with most audiences it is. As long as the core message is not trivialised, the occasional gimmick can be used to implant markers in people's minds, the more memorable the better. This can be achieved through a lively presentation illustrated by glorious pictures, but something a bit more dramatic always helps people not to forget the event.

An introit on bagpipes is bound to attract attention anyway, but if they have been fashioned from the villain of the piece and the tunes played are specially composed, all the better. It all began as a gimmick, but the project was so successful we now have a perfectly serious Scottish smallpipe of quality. Ross even had a second order, this time from Sweden, so now the world has two Rhoddiepipes and two Roddiepipers.

A CELEBRITY BAGPIPER'S RESPONSE: "I was vaguely aware of the R.p. issue, but now my vagueness is banished. I feel the Rhoddiepipes should play in a mode other than mixolydian - perhaps a new one called HypoRhododendronian." Jon Swayne, bagpipe maker, virtuoso English bagpiper, originator of a new English bagpiping culture and President of The Bagpipe Society. 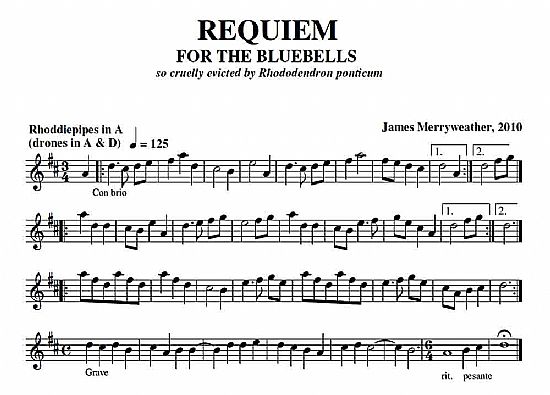