MALE FERNS:
why do botanists find them difficult?

The full article can now be read in: 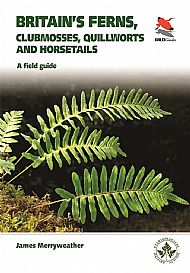 The ancestry and breeding behaviour of British male ferns, as understood at present, are complicated and incompletely comprehended , but current understanding reveals much that makes male fern biology a fascinating, if demanding study.

In the absence of apomixis, reproduction of hybrid plants is rare, but if chromosome doubling coincides with hybridisation, reproduction may be reinstated. The cell division mechanism that produces the spores (meiosis) is, by and large, disabled by the non-combination of incompatible chromosomes from separate species, but it can snap back into action when polyploidy creates matching sets (see also Niklas 2016).

That is how we got Polypodium interjectum (a hexaploid: 222 chromosomes) from the sterile hybrid of P. cambricum (fertile diploid: 74) and P. vulgare (fertile tetraploid: 148), which is known, when we find it today, as P. x font-queri (sterile triploid: 111), followed by doubling (fertile hexaploid: 222).

Doubling during hybridisation is also how our common male fern D. filix-mas became a successful, widespread species. It is a fertile tetraploid (164 chromosomes), having twice the chromosome complement of each of its diploid parents (82 x 2 = 164). The hybrid, like the parents, would have been sterile had not something happened during meiosis that duplicated its chromosomes and made what we consider to be a distinct species.

D. oreades is reckoned to be the most ancient of our five male ferns, a diploid British species whose ancestry is unknown, but it was probably involved in the origins of all of our male ferns. Its ancestry can be defined with a genome formula: OO.

D. filix-mas (OOCC) emerged from the coalition of D. oreades (OO) and another species no longer found in this vicinity, probably D. caucasica (CC) of eastern Europe and western Asia.

Each of the three scaly male ferns has a different genealogy from the others. It is thought that they are variously descended from hybridisation events long ago, involving our own D. oreades (OO), D. wallichiana (WW), found wild in the Himalaya, and D. caucasica (CC) (Fraser-Jenkins 1996; 2007). Both Hugh Corley (1996 pers. comm.) and Clive Jermy (1999, pers. comm.) considered that WW could have been either D. wallichiana or D. crassirhizoma. Further research is required before we will know for certain, but we have enough information to enable us to reach some reasonably convincing conclusions.

It is well worth getting to know the foreign ancestral male ferns, familiarity with which will refine your identifications of the British species. D. wallichiana and D. crassirhizoma are striking plants that can be obtained from plant nurseries and many garden centres, but being rather plain and almost indistinguishable from D. filix-mas, D. caucasica is all but unobtainable.

‘Seeing’ ancestral characteristics in male ferns can help enormously in identification. The toughest, shiniest, yellowest, scaliest of the three, D. affinis, looks just like a mixture of stout, angular, golden, glossy, scaly D. wallichiana and soft, green, rounded D. oreades. The next in robustness, D. cambrensis, we can imagine being D. affinis diluted by a second dose of D. oreades genes: less glossy and tough than D. affinis and with distinctly lobed pinnules. The least robust, D. borreri, looks most like D. filix-mas (influenced by its share of D. caucasica genes) but has some visually evident (dilute relative to D. affinis) genetic influences provided by D. wallichiana or D. crassirhizoma, expressed particularly strongly in its angular, toothed pinnules.

It was not until I had sorted this all out for my own interest that this background biology became clear and I was able to make progress in my ability to recognise the five core male ferns. I am still baffled by some plants that are either intermediate, perhaps because of fine genetic variation, or – and total misfits do turn up occasionally – because some individuals really are different and refuse to slot into this scheme. We should not worry unduly about anomalies, but be content to recognise the five common species, until specialists publish convincing descriptions of as yet unknown taxa playing an important role in British ecology. Still, we must keep our eyes and minds open for unfamiliar forms to which we cannot apply a name, storing them in a mental and JPeG database for future reference.

Both D. oreades and D. filix-mas reproduce sexually: their prothalli have both male and female organs. The three scaly male ferns lack archegonia (female), but since they have antheridia (male) and can produce antherozoids (sperm), they can cross sexually with the two ‘hermaphrodite’ species, D. oreades and D. filix-mas, creating hybrids (one way, as male parent). The male-only condition is known as apogamy, which can facilitate one-way male-female hybridisation, but not the other way around. The process by which apogamous male ferns multiply asexually is called apomixis.

What follows is a brief précis of what may be read in full in Fraser-Jenkins 2007 and Trewren 2014. If convoluted taxonomy causes your brain to shut down, reading the next three paragraphs is not recommended.

Just once, on Mull, a most unexpected hybrid plant of bipinnate D. oreades and the tripinnate D. aemula (D. x pseudoabbreviata) turned up. What might we have if that doubled and reproduced successfully? During the same field trip, Clive Jermy, who took us to this strange plant, also showed us specimens of Hard Fern Blechnum spicant that bore their sori on what should have been sterile, vegetative fronds – so, Blechnum anomalum – I dare not say any more, other than: be ready for surprising botanical anomalies.

A male fern hybrid is likely to be sterile (producing dysfunctional spores) so that these plants are unlikely to be able to procreate by sexual means. However, occasionally a few spores are viable and the ability to reproduce asexually by apomixis is then capable of expression, so clonal propagation becomes a possibility. This must be a rare occurrence because, if not, every hybrid could give rise to a population of a novel male fern (a species?), each with the potential for longevity and geographical expansion. It is likely that we do not have the situation faced by experts dealing with dandelions, hawkweeds and other tricky apomictic plant complexes, in which there are not a mere nine similar types, but hundreds. If that were happening, as yet unnoticed, it would be another reason why male ferns might be considered difficult.

In conclusion, I will paraphrase Chris Page’s advice that: ‘The satisfactory morphological identification of all of the British and Irish variants of this taxonomically very complex [apomictic group of] species usually requires a symphony of characters to be taken into simultaneous account.’ – Page 1997

Only by considering and comparing a full character set can one hope to identify any of these ferns in the field.